Why Google Plus Will Dominate My Social Media Strategy 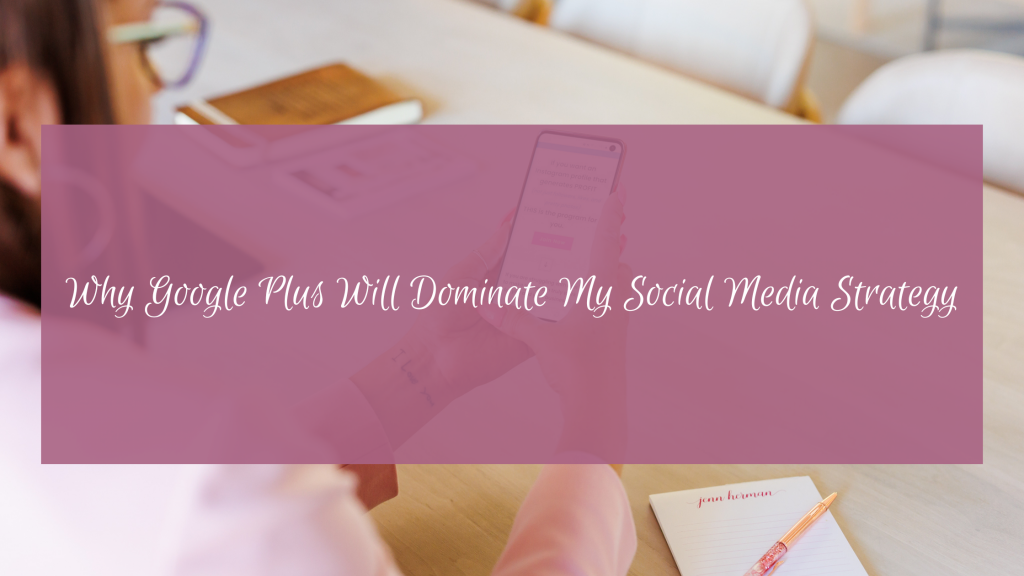 Since I started blogging I have focused on a lot of social media platforms that I believe are important to you. I have written numerous posts about how to use Facebook and Twitter to grow your business. I’ve also talked about LinkedIn, Pinterest, and Google+. Of course, I’ve written a lot about Instagram because I believe so strongly in that platform.

Even though I’ve talked about Google+ and how I plan to spend more time there, I felt like I needed to give more clarification as to why I’m doing this.

I will still devote time and energy to Facebook in 2014. I can’t ignore the presence I have there. But in 2014, I will focus the majority of my social media time and attention on Google+, Instagram, and LinkedIn. I will also increase my presence on Pinterest, though it won’t be a priority site. You will still see me on Twitter too, although I won’t be using it in the same way I did last year.

I’ve had to look at how much time I have and determine which sites are most viable for my goals. And at the top of that list is Google+. Here’s why:

The level of interaction and engagement that I receive on Google+ exceeds what I see on Facebook and other sites. To be fair, I receive my highest levels of engagement on Instagram, but this blog post is about Google+, not Instagram. When I share new posts to Google+ I receive more +1s and more comments than when I share those same posts to Facebook. Often the comments are real conversation that expand the content of the post to a whole new level where others can join in the conversation as well.

The amount of organic growth that I’ve experienced on Google+ far outweighs the efforts I’ve had to expend on Facebook to get less growth. As of writing this post, I have 956 fans on my Facebook page. On Google+, I have 1093 followers who have added me to circle. In one month on Google+, I have gained 255 new followers. I have not actively followed new people nor advertised in any way (fan parties or anything like that) to gain new followers. This also includes the holiday time when people are less active online. On the contrary, on Facebook, I have gained 15 new fans. Need I say anything else?

Since there is no Edgerank or other fun algorithms to mess with my posts, every one of my posts on Google+ has the potential to be seen by my followers. Obviously they all don’t see every post. But at least Google isn’t deciding for them which posts they get to see. And on top of that I have a blog notification circle on Google+ where I share all my new blog posts. Everyone in this circle has asked to be added here and they receive a notification/email to tell them that I have released a new blog post. This way I guarantee that even more people will see my posts!

I found out this tidbit a while back and it inspired me to focus more on growing my Google+ presence. If you’ve ever searched for something on Google you may have noticed that people who you are connected to on G+ show up in your search results. For example, when I’m looking for certain topics related to social media, many of the articles or G+ posts that my connections have shared rank on the first page or two of the results. Google assumes that if someone you know has an answer to your question, you’re probably more interested in that than a random result. The more people have you in their circles, the more often your posts and content will show up in Google searches!

With the prevalence of video in 2014, Google Hangouts are going to be very popular this year. I have to admit that I was a little resistant to these last year and nervous about being on video with people I didn’t know. But the opportunity to connect with new people and to have real conversations is so rewarding! I’ve only participated in a few Hangouts but they have all been extremely rewarding. I look forward to doing many more of these in 2014.

For all these reasons, I am excited to move Google Plus to the top of my social media strategy for 2014.

But I would like to hear from you. Is Google+ a big part of your strategy? Or will it be this year? Sound off in the comments below and let me know why! 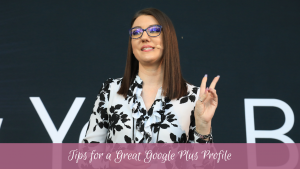 Tips for a Great Google Plus Profile

Whether you're new to Google Plus or a bit more of a veteran, it is important to have an awesome profile END_OF_DOCUMENT_TOKEN_TO_BE_REPLACED

My Favorite People on Google Plus

As you probably know by now, I've been spending more time on Google+ lately. One of the reasons I enjoy it END_OF_DOCUMENT_TOKEN_TO_BE_REPLACED